Recently I was looking at the PC Points app to see what kind of offers are available in the upcoming days. Many of these are usually customized based on what the app thinks will get you to go into the store. If you remember recently I got an offer from Shoppers Drug Mart where if I buy anything in-store I would get 1000 points. In the end I decided to buy a dozen eggs.

So isn’t that a coincident where this week it gave me a crazy deal where I could apparently buy one dozen eggs for $1.49. I told some family members to check the deals as many people usually buy eggs. To their surprise they got different offers such as potato chips which weren’t very useful to them. But with that in mind I mentioned I would buy the two limit and give some to them. 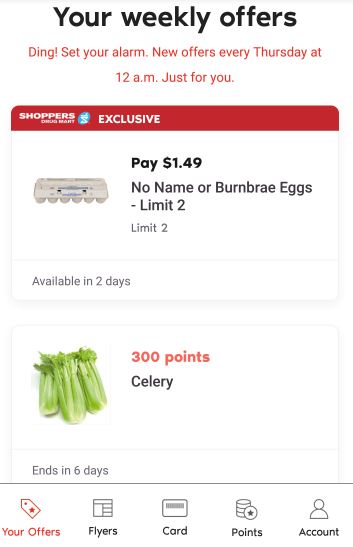 But it made me think how talking about the personal store deals you get with others can benefit someone in the group usually. I was even saying maybe the potato chip offer was because of things like the hockey games and I am sure someone would want that deal. This is a better approach as opposed for any store deals as opposed to just say deleting the offer because you don’t personally need it. If I know something is a great deal in general I usually share it with others because as they say it is deal too good to pass up.