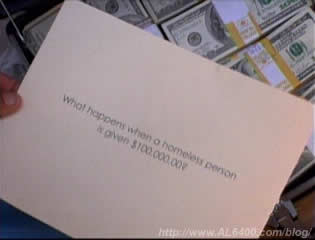 I’m not sure how I missed this before as someone just informed me about it. There was this documentary filmed awhile back that was trying to answer a question on how if you simply give people money will it solve their problems? I wasn’t able to find a copy of the video to watch and so instead I watched some brief clips and read a story synopsis of it. The film documentary is called Reversal of Fortune where the film makers followed the life of a homeless person as we see his life of living under a bridge and recycling cans for money. Apparently they actually pre-screened the person by doing things such as a medical exam and so this wasn’t merely say a crazy homeless person. One thing that got a reaction out of me was how they showed clips of him smoking and drinking a lot of alcohol which in some ways is like he wants to remain poor as while obviously he doesn’t make a lot of money, I’m pretty sure those two habits must cost him a lot every month. I’m guessing this would be more true for him as buying alcohol can be a full day of work for him. There was a twist to this as during the person’s daily rummaging to find cans to recycle, in one of the garbage bins the film makers placed a suitcase that had $100,000 in it. This was given to the homeless man and he would be able to spend it in any way that wanted. He immediately began to tell friends and family members about his newly found fortune and was confident that he would never be homeless again. One of the first things that he did with his money was that he gave it to some friends and even purchased a new car for a person he knew from the recycling center. Afterwards, he even bought himself a truck. Just that alone was over $34,000.

He also visits his family and they are all excited about his new fortune. He was also given advice to find a job and to seek financial advice which was provided for free. Instead, he objects to the advice that was given to him and instead kept spending his money on things like smokes, alcohol and playing video games all day. To top it off, he even got married. He basically just kept living a free life and says that he made so many new friends as well and also gave away so much money to others for things such as paying off their debts. In about 6 months, he lost everything. With no real income coming in and continually spending without thinking about the future he eventually became homeless again. He even mentions how no one wants to associate with him anymore now that he doesn’t have anymore money and that he has more debt than before and is worst off.

Too bad I didn’t actually get to see the full video as it doesn’t seem to be available here, but I think I got the idea of the main story and what happened. I personally think this is so true in general on how just giving people a lot of money does not solve anything as you have to start with the root of the problem. You can even change this to a lot of lottery winners who became instant millionaires and the story is about the same.

Another thing was the comment about making a lot of friends when you have a lot of money. In some interviews I read the person kind of blamed others and condemned them for how he helped them when he had a lot of money and they wouldn’t do the same for him afterwards. As harsh as it sounds, you really have to take responsibility for that I think as it is your choice in say giving away a lot of money to people you don’t know too well. I guess the main thing that I do all the time is to try and find consistency with people before I associate with them to really find out how genuine they are.

Most people that I know who are well off financially too don’t really show it as in they don’t say wear thousands of dollars in jewelry or drive the most expensive cars as a way to expose their wealth. People usually mock more famous people such as Bill Gates for having what looks like such a cheap haircut for a wealthy person, but you’d be surprised on how many people are just like him where they look like a simple person because they don’t want to attract all of the phoney people who are only after your money. I guess this documentary clearly demonstrates that.

This was a very fascinating idea I thought. While I kind of expected it to end the way it did, it’s interesting to actually see it take place and hopefully a lot of people will learn from this. You first really need to be financially educated as when you are given an enormous amount of money without doing so you won’t know what to do with it and can end up hurting yourself even more financially and emotionally.