Today some of my friends started to send around this picture: 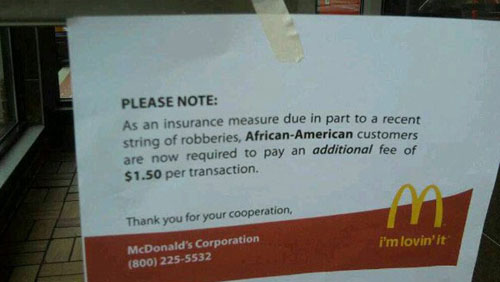 Yes, my first reaction was this has go to be a joke as there is no way a company that big would do something that ignorant. Sure enough it is a hoax and apparently last year this picture went extremely viral and the company had to react fast to confirm it as a hoax as there were a lot of people who thought it was real.

It was so interesting reading how this little hoax can create so much havoc to a company and how so many people don’t even try to think twice on its legitimacy. I was trying to see how with this example where I got it and why people would think it’s real. The main thing I thought of was that the person that sent it did so through their mobile device and like many of those devices it usually leaves a footer message such as those “Sent through my Blackberry”notes. Therefore, the assumption is the person took a picture of it while they were walking around at that moment. There actually were people commenting on it as if they believed it was real.

Guess the lesson is if you are the business you have to act fast to respond to things like that as it can get out of control fairly quickly.