Bill And Melinda Gates Divorce With No Prenup 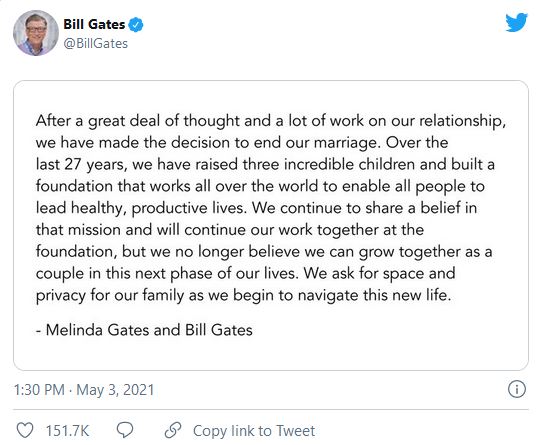 Well this was an out of nowhere story today it seems as Bill Gates is apparently divorcing his wife Melinda Gates after 27 years of marriage. Most of the time I heard these two names pop up recently it had always been something charitable related. But now with this sudden divorce the biggest headlines seem to all revolve around money and how much would be split between the two as there was no prenup.

This is one of those topics that everyone feels is wrong in the sense of if you ever get a prenuptial agreement that means you as the couple don’t trust each other in life which should mean you should not get married. So with that type of social pressure most don’t. But like in these cases you can see how messy it can get if it just doesn’t work out after all those years. So when it comes to finance in a relationship should prenuptial agreements be normalized?

I suppose in many ways it can be true where it automatically implies the relationship will dissolve which isn’t good. At the same time no one can predict what will happen in the future as people and relationship needs may change. Ultimately though is it just too weird to treat it like a business per se where you need everything in writing ahead of time in case things go bad in the end?