I attended the Learning Annex event with an open mind and as you all know one of my main goals was to document my experience. It was held at the Vancouver and exhibition convention centre and to my knowledge there were about 4000 to 5000 attendees. Of course, I’m sure most people attended with the assumption that they would get to see Donald Trump live as well as getting a free copy of his book “Think Big and Kick Ass in Business and Life”. 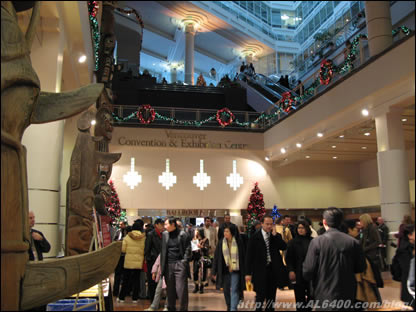 They sent a mass e-mail to all the registrants beforehand on how the first fifty people in line would get $100. Apparently the first person there was lining up as early as 2:30am. That alone kind of gave me a picture beforehand on what the overall event would be like.

The live speakers there consisted of Bob Kittell, Dr. Albert Lowry, Don Burnham, Lee Brower, Raymond Aaron and Chris Johnson. The topics ranged from making money with stocks, real estate, utilizing government grants and general motivational speeches. With the exception of Lee Brower’s keynote, for the most part the other sessions felt like an incredibly long infomercial using typical techniques to get people to buy tools and seminar packages on the spot.

Here is an example with the first session which was pitching a seminar for a product called Investools that is suppose to help people in deciding when to sell or buy stocks. At first the speaker teaches people about some very basic information about the industry in general which of course is very enlightening if you don’t already have too much knowledge of it. They then proceed to inform how lucrative it can be to get involved while showing all these testimonials from people who have been successful with it.

With that planted in people’s mind, they then show you how expensive the program would normally be apparently while using a return on investment way of thinking to further justify the price. Afterwards, they tell you how they are offering this exclusive promotion for that day only where they have decided to give it at a special discounted price and that there are limited quantities. With Investools for example, it went from $4,297 to $999 (Which was a pretty consistent final price range for most of the other products). 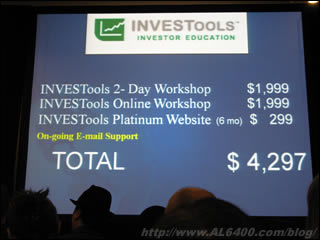 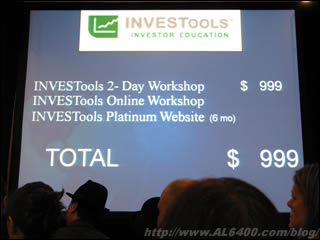 This would cause a frenzy of people to get up from their seats to purchase the product right away for a fear of loss. It then felt like an auction house of some sort as the person would ask people to bring out their credit cards while continuously counting down how many have been sold. I captured a quick video of it here:

There was one technique that was used by a lot of the speakers which I thought was a bit devious personally. A lot of times the speaker would use the promise of giving people something expensive or luxurious for free on the spot to play with the crowd’s emotion to get them to chant and cheer. Then at the very end they casually slip in on how you have to buy their product to qualify in getting it for free. A great example was with Raymond Aaron’s session as he made a lot of people believe that he was going to give everyone in the room a free cruise ship vacation if people show enough enthusiasm. Here is a sample of that:

Aside from the speakers, most of the other happenings revolved around giving away money and prizes such as raffles and holding a quick dance contest. There were some activities that involved people having to network and meet others. I personally thought it would have been better if there were more events like that. I did get to meet some new contacts which was nice. People were getting weary overall it seemed with the conference and the event organizers would constantly mention how Donald Trump will be there.

At around 7pm or so one of the event organizer mentions how it was time for everyone to welcome Donald Trump. The lady was presenting it as if he was going to walk in the room. A lot of people were simply looking around the room and then to a lot of people’s surprise it was simply a recording from one of his past appearances at an Annex event in New York. There were a lot of moans and sarcasm from the crowd over it initially and it almost felt like the lady was shocked over the reaction. Lucky there was no anarchy of any sort. A lot of people simply left in disappointment without even watching the recorded speech.

For the Trump speech in general, myself and a lot of others thought it was kind of humorous when you could clearly see that the video was shortened from the original length it seemed as there would often be these noticeable video transition effects. Here is some of the video for those who are interested:

In the end, I did get a free copy of the book as advertised. It was disappointing overall I thought personally and I really didn’t like how some of the speakers seemed to try to belittle the status of the attendees as a way to imply that buying their products will help change all that. Some example are how there was a generalization at times that all the people in the room had horrible credit scores and that they could help them fix that or that everyone in there were poor financially with a disappointing lifestyle. I don’t know about everyone else, but I would have preferred if it was more of a positive approach in wanting to genuinely help others. I did get to meet friendly and successful people too and so all was not lost.

I thought the best session was Lee Brower’s keynote as he seemed genuine in wanting to help/inspire people without a hidden agenda to sell a product of some sort. There was a funny blooper at the end as he wanted to give away this package of Pringles to the crowd and the lid flipped opened.

If there was an actual fee to attend the event though I could easily see how a lot of people would have been outraged over it. I think most people were disappointed overall based on the comments I heard. I personally walked away with what I intended to do which was to attend mainly for experience.

In my opinion, I think the important thing to realize before attending these types of events is that if you want to change something in your life it always starts with you changing yourself first. That way you’ll prevent yourself from buying all these things emotionally in hopes that it will be a quick fix answer in life whether it’d be personally or financially.

Comments to The Learning Annex