So after seeing that Uber deal where they were giving people $30 off of a purchase to try its service I am always thinking there has to be a catch. So I started to browse around the Uber Eats app to see what was around and the prices. My first thought was maybe the food prices were more expensive than the in-store prices. But looking at some common fast-food restaurants the prices seemed the same. I was seriously contemplating about actually tying it.

That’s when I realized how they make some of that money back to the point where it’s almost like you are going to spend an average day’s expense if you dine out in the end still. With these types of offers I actually play around at first to see if you could literally find something that adds up to the exact amount of the couple to make it virtually free. I then got one that was close and looked at the total. 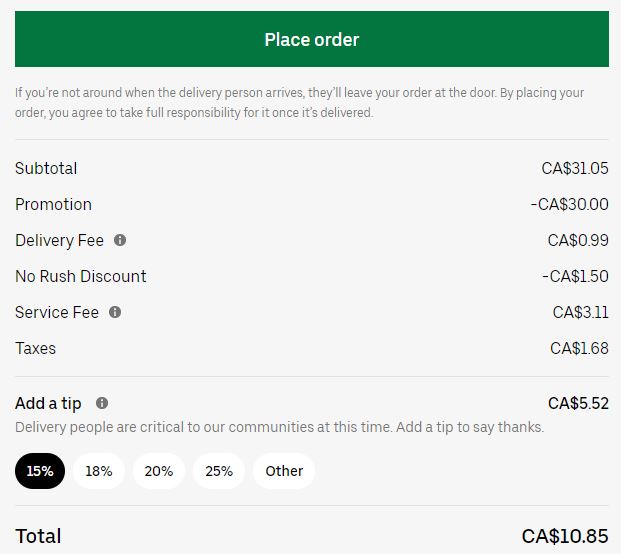 As you can see, it says in the end I would still pay about $11 even though I have a $30 off coupon. Why is that? If you look at it the large extra fees comes from the service fee and the tip. The service fee is based on the total amount you ordered. So the higher that is the higher the fee may be. Then there is the tip. That is technically optional, but most would still pay it. If I didn’t check off the “no rush“ option I would have even paid more.

So you do technically still get more than if you paid without the coupon, but it is a far cry from being free if that was the motivation to order initially. I was thinking too in this case most of the offers were within walking distance. Using this would almost be like you are paying a 20% – 30% premium to have it delivered. That ultimately makes this deal only really sensible if you were planning to order out anyways initially. Otherwise this is like those situations where you spend money just because something was on sale.