Walmart Canned Food Drive For Its Own Employees
Business

Walmart Canned Food Drive For Its Own Employees

Bizzare news indeed. I was reading some of the news today and read one that talked about how apparently a Walmart in Ohio was collecting canned goods for the less fortunate for Thanksgiving. While that isn’t out of the extraordinary, what made this weird was that apparently this was for its own employees. This picture of the bin was being shared everywhere too: 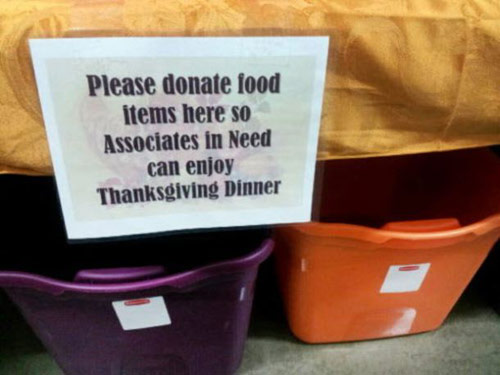 This must not be a very good situation for the corporation considering the stigma that is already attached to it of being a company that underpays its employees. It makes me wonder how this idea got started too. On the flipside, I was thinking how if this is any different than people who work in the restaurant industry where they expect/demand customers to tip them with similar reasons being that they get paid too little from the company itself. Ironically, in that case it wouldn’t be as controversial.

Either, having this pretty much admits that a company isn’t taking care of its people and this probably won’t bode well for them.