The City of Orgasm? This Is Suppose To Attract Americans?

Well wasnâ€™t this an interesting piece of news for this Valentines day. In Victoria, the capital city here in BC, there is this new tourism campaign that is being rolled out in an attempt to attract tourists such as people from the US to visit the city and to help revitalize its image. To do this they are using these types of ad: 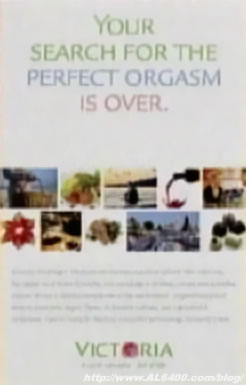 As you can see, the ad basically says â€œYour Search For The Perfect Orgasm Is Overâ€ which should be obvious on what it is trying to imply. For me personally, when I think Victoria I think historical sights and landmarks. Now apparently it is going in circulation around the Seattle area, so maybe some people have seen it already. Is that supposed to be the secret in getting American tourists by using sex as a selling tool? Now whether or not this will be a successful campaign will be interesting to see. It would kind of be interesting to hear what a non Canadianâ€™s image of Victoria is initially and then how they react to that ad. Cause in some ways if most Americans never even heard of the place then it wouldnâ€™t be as shocking.