Shopping Like A Business Without Real Discounts
Financial Management

This was kind of funny I thought as I was reading how Costco in Canada was selling this large pallet of Lucky Charm snack bars. There are 360 units in this pallet consisting of 24 bars per box. As you can see from this, the regular price they would retail this for is $2999.99 and it’s currently on sale for $2279.99. 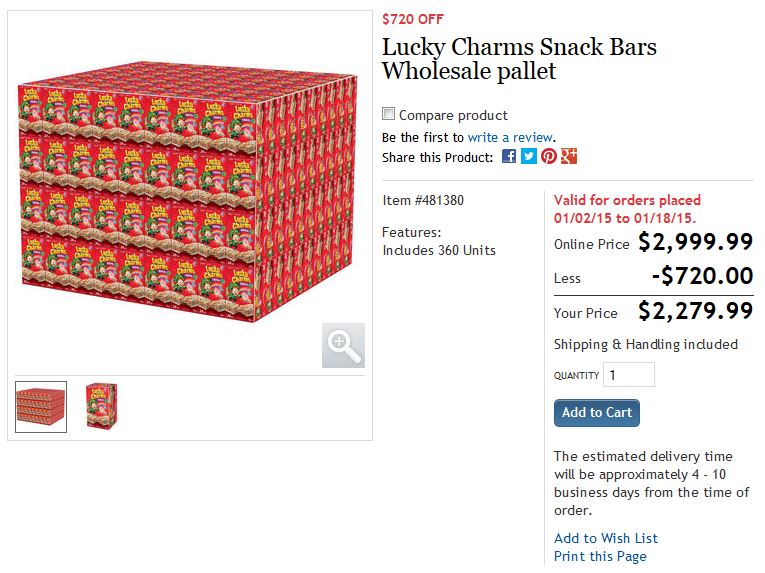 Another way to look at it is that each box costs about $6.33 which works out to about $0.26 a bar. The funny thing is I know I have seen just a regular box sell for cheaper at about $6 a box. It made me think how many times when people shop wholesale like this it’s almost like you are shopping bulk as if you are a business dealing with the manufacturer except you are paying higher than regular retail prices. Example, if you were to deal directly with the company General Mills here you would probably save a lot.

Now granted a regular consumer usually can’t do this as manufacturers often require a minimum purchase. But if you are ordering a large pallet like this it would probably be worth it to deal with the manufacturer directly. But my main thought is this is an example of how just because you are buying something in bulk it doesn’t necessarily mean the deal is better. If you think about it, sometimes retailers buy so much in bulk that it enables them to sell it in smaller quantities cheaper to people even if you try to buy a large bulk yourself.