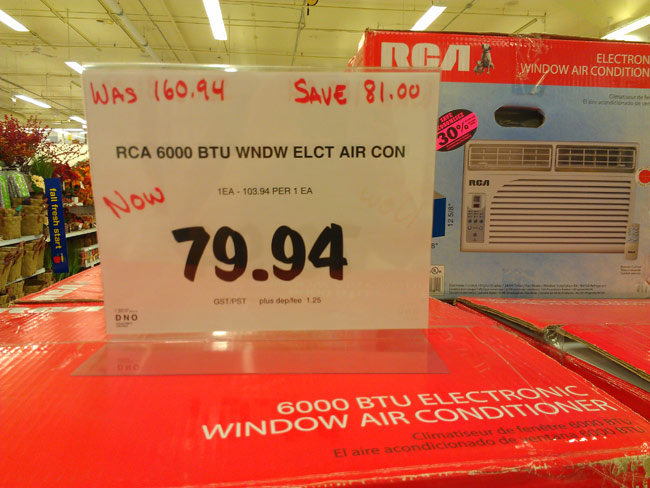 While browsing through the supermarket today I noticed that there were a bunch of air conditioners on sale. From the looks of it, they initially slashed the price by about $60 only to drop it more. While the boxes kind of looked like they have been opened, this is definitely the time when a lot of businesses attempt to get rid of its summer inventory products at a huge discount. Would you actually make purchases now for next year’s summer?

For small businesses I usually see a lot of them buy equipment from the bigger stores at times like these simply to resell them next season at the original full retail price. Usually small companies don’t have the buying power of large corporations and so this is like the next best way to get cheap deals which they can resell in the future for a lot of profit. I have even seen Dollar Stores resell company branded merchandise such as food from the now defunct Target Canada as an example.

So if this year you thought there were some items that would have been great to purchase for the summer season except the price was too high now may be a good time to buy them really cheap to prepare for next year. Don’t forget too, a lot of winter items right now are pretty cheap as well where you may want to get it now for less money as opposed to waiting for winter.