Service Providers Banning People And Companies They Disagree With

I suppose everyone has at least heard of the news in some form that the US president Donald Trump had been banned by various social media sites such as Facebook and Twitter with reason being that they believe his messages incite violence such as the recent event at the US Capitol Hill. While a lot of people were saying tech companies shouldn’t be censoring people the other side of the argument is a private company can do whatever they please in terms of who they aloe on its platform. 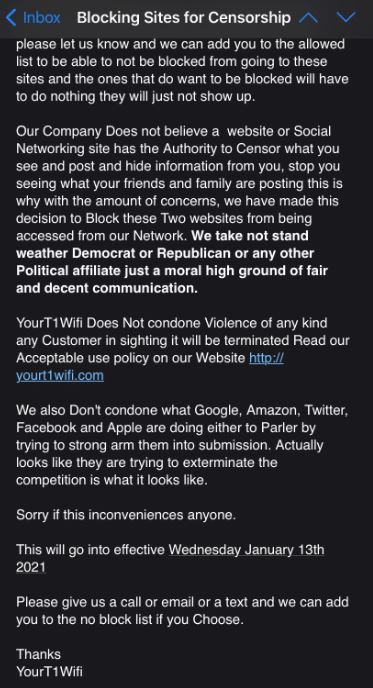 That is where it kind of got interesting as apparently there are literally Internet service provider companies that have been blocking sites like Twitter and Facebook. I was reading these messages about a company called T1Wifi that sent its customers messages explaining how they disagree about the actions in censoring people and with their customers requesting that they don’t want to see any materials from those sites the ISP has decided to blacklist it.

How crazy is this going to get huh? I would have thought ISP’s fall under a different standard like a utility company where you can’t just cut someone’s water and power because you disagree with them as an example. But from what I read if you wanted to visit those sites through them you could ask to be whitelisted. They always say business and politics usually ends up creating no winners. This example sure shows how crazy it can get.