Interesting story here recently where there have been these rallies in the Vancouver area protesting against a lot of the rules implemented to hopefully control COVID 19. However, many people feel it is an overreach with things such as lockdowns and not factoring everything else that it harms such as the economy. Recently, a well-known singer named Mark Donnelly decided that he wanted to sing the national anthem in support of this cause as he believes the current protocols are draconian.

He is most known for being the official singer for the Vancouver Canucks hockey games in the beginning as it kicks off with the national anthem. However, shortly after news broke out about this the owners immediately fired him publicly. The rest of the world literally found out before he did. He then mentioned how he thought they would have at least politely talked to him first. However, he recognized that in doing this he was fully aware ahead of time that he may lose his job. 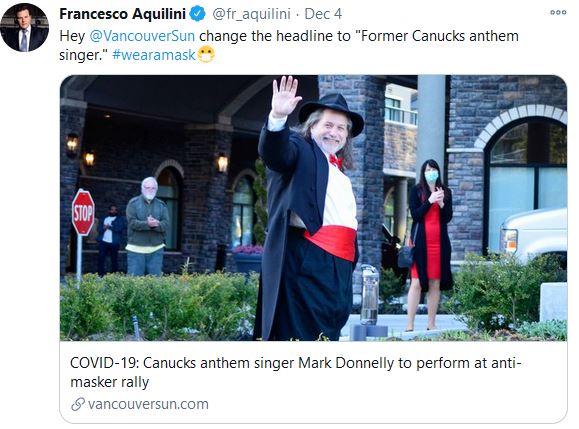 Now whether or not all the current rules and restrictions make sense is one topic, but for this I think it’s kind of interesting to see why many business and entrepreneurs try to avoid talking about these kinds of things publicly. Feels very similar to the notion of people staying away from politics. It turns it into a situation where you won’t be judged based on your work and skill.