Deal or No Deal In Canada
Making Money

Deal or No Deal In Canada

So, apparently the TV show Deal or no Deal is coming to Canada as I have been seeing more advertisements for it here. The applications are now closed for people wanting to be contestants, but they are now apparently going on a talent search to find models for the show and the application process will begin on around December 11. I guess there are probably a lot of hopefuls out there who would want to do that. Just for fun, I played the online version of the game that was on the site which was suppose to give potential game applicants a taste of being on the show and I guess I must be a pretty lucky person as I actually got the million. Here is a screenshot: 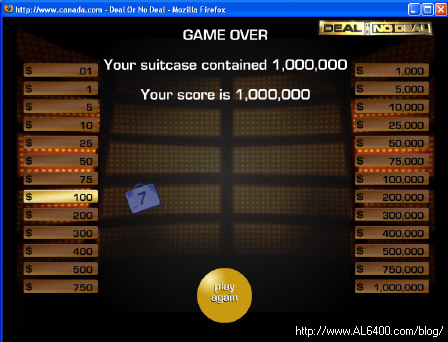 Iâ€™ve actually never met or know anyone personally in real life that has been on a game show let alone win big at it. It must be one of the more fun ways to make money.