A cable Internet service provider here in Canada called Shaw recently announced that it would adjust its service rates where essentially people will be paying more. Even for a person like myself, I would be paying about $7 a month more for no real reason in my mind other than the company wants to make more money. The corporate response from the CEO is that the price is justified due to people using more bandwidth draining actives such as streaming movies.

That then got me a little curious to find out if the company itself even cares about being competitive with the competition such as these kinds of rates:

So I decided to inquire about it online. I first asked a very basic question where as a customer I know there are companies that offered the same if not better for less. This was the response: 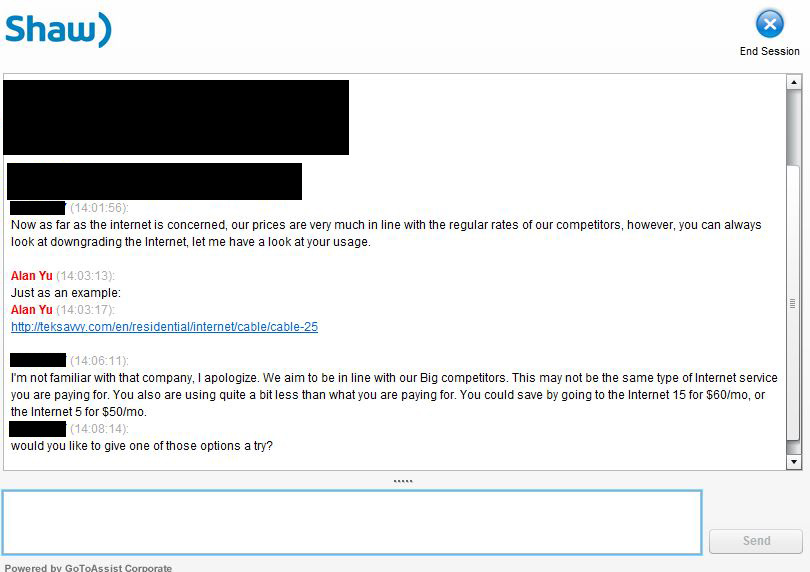 The first surprise was how the immediate response isn’t to try and find out what the competitors are offering but rather to suggest that one should downgrade their account. In this case too, it would be downgrading to a slower service than what I am currently using.

So to help the person out a bit I linked a competitor where its rates was almost half as much. To my knowledge too, this company operates by using existing infrastructures from the bigger companies. I kept getting what you would call a bridging statement where the person attempts to sway the topic back into the direction they want. In this case, ignoring the competitor and talking about going to a lower service with them.

I didn’t want to push it much as I know the customer service clerk was only doing their job. But I was thinking how from a business point of view this decision will probably bring a large increase in revenue initially only to have a larger downfall later. Even I am thinking of simply moving every service elsewhere as the type of responses that the corporation has implemented for this makes it sound like they are a monopoly and can do anything as it pleases. Just for the record, I know companies have retention deals too, but you shouldn’t bank on getting it.

Maybe this is a good thing as it will force me to research the market more in-depth and find providers that give the best value for the dollar within my province. Only time will tell though where for business decisions like this if most customers will simply abide to the increase or if it encourages most to look for better deals.