Is Unfriending People On Social Media Bad For Your Career 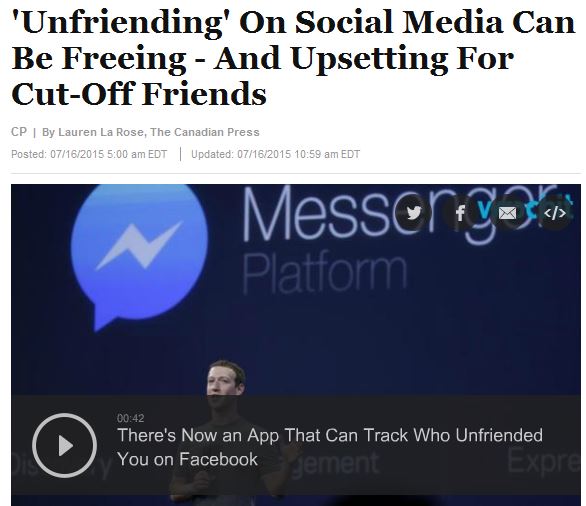 I was surprised to see these interesting headlines today on how unfriending people on social media sites such as Facebook can have a bigger impact on your relationships than you think. While many people often “clean up” their friends list as a result of clutter with news feeds as an example, many people interpret that action as you wanting to cut ties with them for whatever reason. That doesn’t bold too well when you still see those same people around your daily life.

For myself, I have seen more examples of unfriending people as a sign of wanting to cut contact. I heard one example just a week ago where two people were friends on Facebook. They just happened to bump into each other in-person as a result of an event. However, the other guy wasn’t attentive to him due to having to work onsite and managing a crowd. Therefore, the person unfriended him as essentially a way to say he will ignore him too from now on.

In many ways too, I do see social media friends and followers as essentially like a gateway where people help each other by giving information or support in various way. By “unfriending” or “blocking” a person is in many ways saying they are not worth your time. That can be dangerous when you think about it. At the same time, I suppose you would have to have the mentality that not everyone you are connected with in social are friends in the traditional sense.

I can easily see something like this turning bad where if you meet the person again and need their help there is a good chance they will have a mindset on how you thought they weren’t worth your time before so don’t even think of asking for help now sort of deal. Besides, there are so many options on these sites usually to do things such as creating specific feeds of information you want to see on a daily basis. Unless you really want to cut ties, it’s probably wiser to keep the connection open.