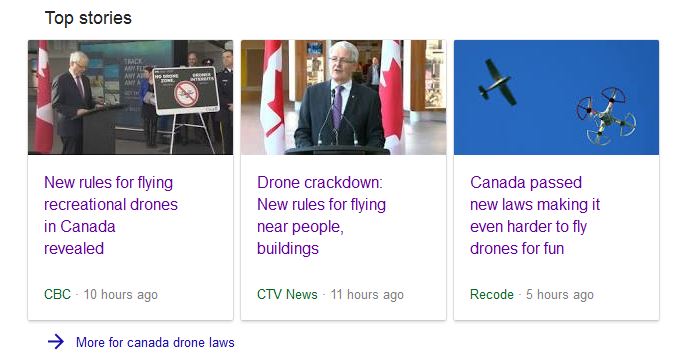 Well today in Canada there were some new laws that made it almost virtually impossible for a hobbyist flyer to fly a drone for fun. Under the new rules through Transport Canada it states the following new rules announced today by Transportation Minister Marc Garneau.

Effective immediately recreational users will face a fine of up to $3,000 if drones weighing more than 250 grams are caught flying:

– Higher than 90 metres.
-Within 75 metres of buildings, vehicles, vessels, animals or people.
-More than 500 metres away from the user.
-At night, in clouds or somewhere you can’t see it.
-Within nine kilometres of somewhere aircraft take off or land, or a forest fire.
-Without your name, address and phone number marked on the drone itself.
-Over forest fires, emergency response scenes or controlled airspace.

Now as expected many people who have never flew a drone in their life are for the rules whereas many experienced people find it a bit crazy. In many ways I was actually planning for this kind of thing where this was one of the reasons why I wanted to build my skills daily this year in case some kind of restrictive law gets passed.

Of the question is what does one do now? I was actually thinking even from a business perspective there are actually many people who would just give up where if it was like a stock market it sounds like the right time to sell as they say. But for me it’s often about the journey. I was actually interested in the commercial aspect of drone flying where in many ways this is like an incentive to research it more now. I was even watching a video the other day where often a lot of people found success during depressing times or like in a recession as that creates the most opportunities.

So in that sense funny enough I am kind of motivated to keep going forward and see where this journey takes me. Wouldn’t that be funny if I actually did end up doing say drone flying commercially because of this? That would be something and it always reminds why I love to document my journey on how I ended up doing various opportunities.