With so many ways to earn an income out there, being able to quickly eat food or having the ability to eat extremely large portions in one sitting has got to be one of the most perplexing things that I have seen people do to earn fame and fortune.

The first time that I saw a competitive eating event where the results were simply mind boggling was on TV as a fast food chain in the US called â€œNathanâ€™s Famousâ€ had an annual hot dog eating contest. There was this guy named Takeru Kobayashi who was from Japan and by no means was he a big person. In terms of eating a lot of hot dogs though, simply saying that he devoured the competition is an understatement. In 12 minutes, he ate 50 hot dogs and his closest competitor ate about 31. Because of this, he has earned a lot of income by winning contests and through endorsements. 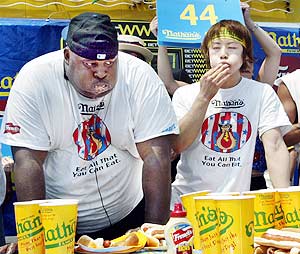 Another one that caught my attention on the news was how a restaurant called â€œDenny’s Beer Barrel Pubâ€ was serving a burger called the â€œOlde 96’erâ€ which was this gigantic burger that had about 6 pounds of beef. With all the condiments on it, the weight of the burger was apparently about 11 pounds. Long story short, there was this 19 year old girl named Kate Stelnick who only weighed about 115 pounds and while many people have tried and failed in eating the entire burger, she was able to finish it in two hours and fifty-four minutes. Since she was able to eat it in under 3 hours, she got the meal for free, was placed on a wall of fame, a gift certificate which she donated and of course a lot of media exposure. 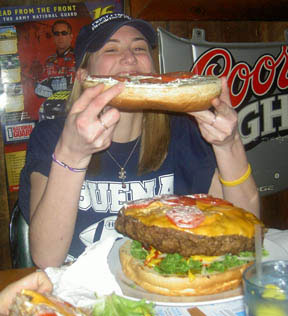 I guess since I canâ€™t exactly eat as much as those people or in that speed that to me it seems kind of painful to eat all of that food. But hey, I guess this shows a viable way for those who have the metabolism to do so as a way to earn an income. For me though, Iâ€™ll just stick to watching it from the sideline. 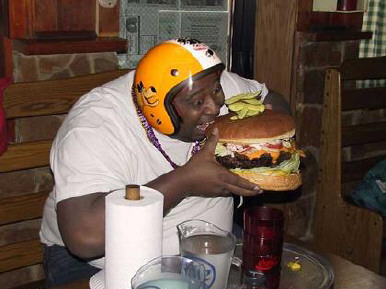